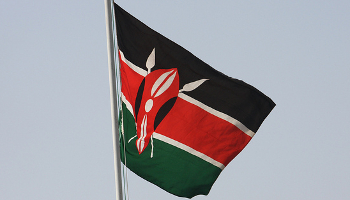 Although relatively better off than its neighbours, Kenya remains a struggling economy dominated by foreign-owned tourism, agriculture, the services industries and a small manufacturing sector stunted by huge imports and counterfeits. Endemic corruption, increased integration into the global capitalist economy and neoliberal policies that favour a small fabulously rich class have conspired to hold the majority of citizens tight in the jaws of poverty.

The numbers are in, but who cares? According to the Kenya National Bureau of Statistics (KNBS), a government agency, East Africa’s largest economy grew by 5.8 per cent last year, a slight rise from 5.7 per cent the previous year. But only Planning Minister Mwangi Kiunjuri was excited when he presided over the release of the figures last week. “This growth was achieved through the government’s commitment in creating an enabling environment for doing business in key areas”, he crowed.

Nobody else saw anything to rejoice about. Pro-government media like Nation’s attempt to splash the news fell flat. The country is so consumed by the rather violent and shambolic party nominations ahead of general elections in August that no one seems to care about government stats. Moreover, it is the norm in Kenya that any matter regardless of its importance would only attract considerable public attention when some big politician decides to go to town on it. But more to the point, there aren’t many people in Kenya who can tell you what a GDP growth of 5.8 per cent did for them personally or their relatives and friends last year. Several opinion polls in recent years have consistently indicated that the number one concern for Kenyans is the very high cost of living.

The 5.8 growth figure isn’t a big deal in another important respect. According to the government’s blueprint, Vision 2030, the economy should be growing at a steady average of 10 per cent to transform Kenya into a middle-income industrializing nation. Now, the highest annual GDP growth rate witnessed in Kenya for more than thirty years is 7.1 per cent in 2007. With only 13 years to go, Vision 30 is a mirage. And the details of the latest survey reveal the utter emptiness of the prosperity rhetoric the Uhuru Kenyatta administration feeds the masses.

A key highlight of the survey is creation of jobs. In 2016, the economy reportedly generated over 856,000 new jobs. Against the Kenyatta regime’s pledge of a million jobs a year, this figure sounds like quite an achievement to shout about from the rooftops – until you examine the details. More than 700,000 of those “new jobs” were in the informal sector, the survey says. That means over 90 per cent of the “jobs” were not jobs at all. Only about 85,000 were real new jobs. Wage employment stands at about 2.5 million out of the country’s population of about 50 million.

What the government statistician calls “new jobs” comprise, at best, fitful micro-enterprises scattered across the country and, at worst, all those desperate survival initiatives impoverished Kenyans venture into to get by: running mobile phone credit stalls, being hired as a motorcycle taxi rider, hawking, distributing leaflets on the streets at a fee, burning charcoal, roadside maize roasting, vending ripe bananas and porridge at construction sites, keeping a corner vegetable stall, piecework at sweatshops, etc.

As a matter of fact, there have been numerous reports of closure of businesses and staff layoffs in Kenya over the past year. In the week the economic survey was released, the region’s biggest bank KCB announced a plan to layoff an unknown number of workers. At least six other banks have done the same.