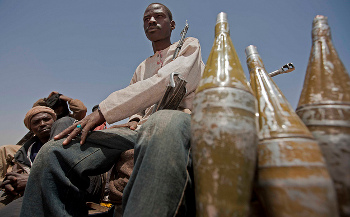 ‘’We have not come across any evidence regarding the use of chemical weapons in Jebel Marra,’’ Ladsous told the UN Security Council, noting that UN mission’s consistently restricted access into Jebel Marra has hindered effective monitoring and reporting.

The Organization for the Prohibition of Chemical Weapons (OPCW) has also assessed that no conclusions regarding Amnesty’s conclusions can be made without further investigation.

In a report released on September 30, Amnesty pointed to the alleged use of chemical weapons by Sudanese government forces against civilians in Darfur, resulting in an estimated 200-250 deaths since January 2016.

Amnesty alleges that chemical weapons have been deliberately targeted towards civilians in the remote region of Jebel Marra in Darfur at least 30 times in the past eight months.

The Amnesty investigation was conducted remotely, from outside Jebel Marra, mostly due to access restrictions. It therefore relied upon satellite imagery, extensive interviews, and expert analyses of survivors’ injuries.

According to the report, interviewed survivors witnessed a ‘’poisonous black smoke that gradually changed colour and smelled putrid’’ during the attacks in their villages.

‘’It smells like someone burning plastic, mixed with the smell of rotten eggs…’’said Kobei, a senior armed opposition group commander, in an interview in the report.

The report mentioned that children were generally more affected than adults after the alleged exposure. Further, injured survivors have had ‘’no access to adequate medical care.”

Both chemical weapons experts who reviewed the evidence stated that the victims experienced a variety of symptoms that “strongly suggest an exposure to chemical weapon agents.”

Identifying the specific chemical agents requires collecting samples from those allegedly exposed, from the environment and from weapon remnants used during the attacks. Given the severe access restrictions into Jebel Marra, Amnesty have not been able to do this.

Sudan is currently a member of the Chemical Weapons Convention that bans the use of chemical weapons.

The Myth of the African travel writer