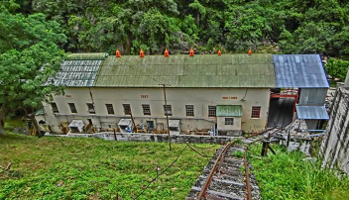 The manufacturer’s plate on the giant turbine casing hints at the vintage of the hydro-electric station: “English Electric Company Ltd, Queen’s House, Kingsway, London”. The once-great British manufacturer of railway locomotives, guided missiles, computers and Lightning and Canberra aircraft, among other iconic engineering contributions, no longer exists, subsumed into the General Electric Corporation in 1968, the merger then creating a business employing more than 250,000.

Today GEC, too, has gone. The company, which by the mid-1990s was valued at £10-billion, was later renamed Marconi Corporation before it folded in October 2006.

Indeed, few things from that era remain the same.

But there’s one. The Mulungushi hydro-electric facility, at the bottom of a 355m ravine 60km south-east of Kabwe in Central Zambia, was constructed by the Broken Hill Development Company and opened in 1925 by the Prince of Wales, the future Edward VIII. It was built to provide power to the Broken Hill Mine in Kabwe and a second, sister facility was built a further 60km away at Mita Hills. (See main photo)

The tenacity, foresight, engineering and dedication required to build the Mulungushi plant all those years ago is breathtaking, the more so given the steepness of the gradient, the inaccessibility of the location, the prevalence of disease and much else.

Continue reading on The Daily Maverick

by Greg Mills and Dickie Davis